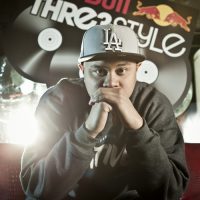 Reigning from Los Angeles, Ellis Tenza is enjoying a highly accomplished career, as his DJ name “Dynamix” is most often precluded with the title “King of LA”. Having taken the party-rock battle scene by storm, Dynamix has been collecting titles beginning with the King of LA DJ Battle, followed by the Beezo Battle, Mai Tai Rumble, the highly coveted Winter Music Conference Scratch Battle, then taking an unprecedented back-to-back Red Bull Thre3Style Championship in Los Angeles, where in 2012, he placed 3rd in the Red Bull Thre3Style National Finals. Catch Dynamix on VH1’s current season of Master of the Mix - a riveting reality series where DJs compete for the title.
From television to radio appearances, concerts or corporate events, and the hottest clubs throughout the country, Dynamix commands a captivated audience. A classically trained pianist, he uses his musical knowledge to create his innovative style, blending seamlessly through an array of genres including rock, pop, funk, soul, hip-hop, and house, effortlessly demonstrating his dexterity while incorporating turntablism into his sets. Dynamix remains in constant rotation showcasing his mixes on The World Famous Wake Up Show, Power 106’s Jump Off Mix, and Shade 45’s Soul Assassin’s Radio Show. His sets have graced the most exclusive clubs, namely Supper Club, Drais, Playhouse, Teddy's, and Soho House in Los Angeles, as well as Rain and Playboy Club in Las Vegas. Having branded himself as a premier DJ in the industry, his corporate clients include Red Bull, Royal Caribbean, Disney, Cover Girl, H&M, Fiat, and US Magazine. His reputation has not gone unnoticed by Hollywood’s elite, as he was also the DJ for Nicole Richie’s wedding.
As one of the original instructors for the Los Angeles chapter of the highly recognized Scratch DJ Academy and an online instructor for TurntableU.com, Dynamix instructs, inspires, and influences aspiring and established DJ’s through his expansive knowledge and comprehensive expertise, preserving his legacy through the next generation of DJs while remaining at the top of his game.